The Under the Fields of Heaton working group have now formed ‘Shoe Tree Arts’ and are working towards an exciting new project:

Planned to coincide with The Great Exhibition of the North the show will run for a week from 17th – 21st July in the People’s Theatre, Newcastle upon Tyne.

The north east region’s contribution to forging the modern world is arguably unparalleled. Newcastle and Gateshead provided the seat of the fire of invention that blazed throughout the 19th and early 20th centuries. And some of the most significant flames that changed the world were set alight in Heaton and the east end; industrial technology, women’s suffrage, social reform, the Labour Party, theatre and football.

The live action of the show will interact and intertwine with a backdrop of filmed material exploring Heaton’s past present and future. Heaton’s choirs and bands will provide live music to include all ages skills and backgrounds.

Richard Scott and Ken Patterson will be commissioned to write new songs and music for the large number of community choirs and bands in Heaton.

In parallel with the show Sally Cooper, actor, Ellen Phethean, writer, Tessa Green, film maker, will lead a group of young artists in residence in Heaton schools and other settings.

Furthermore, Chris Jackson and Les Turnbull of Heaton History Group will manage a programme of ambitious exploratory workshops. These will research the history and heritage of the area in collaboration with a team of historians, scientists and engineers visiting schools and other settings.

With lanterns, we remembered the time when the 75 trapped men and boys were found and brought into the light again. It was also the 200th anniversary of the Davy Lamp which was used in the rescue. 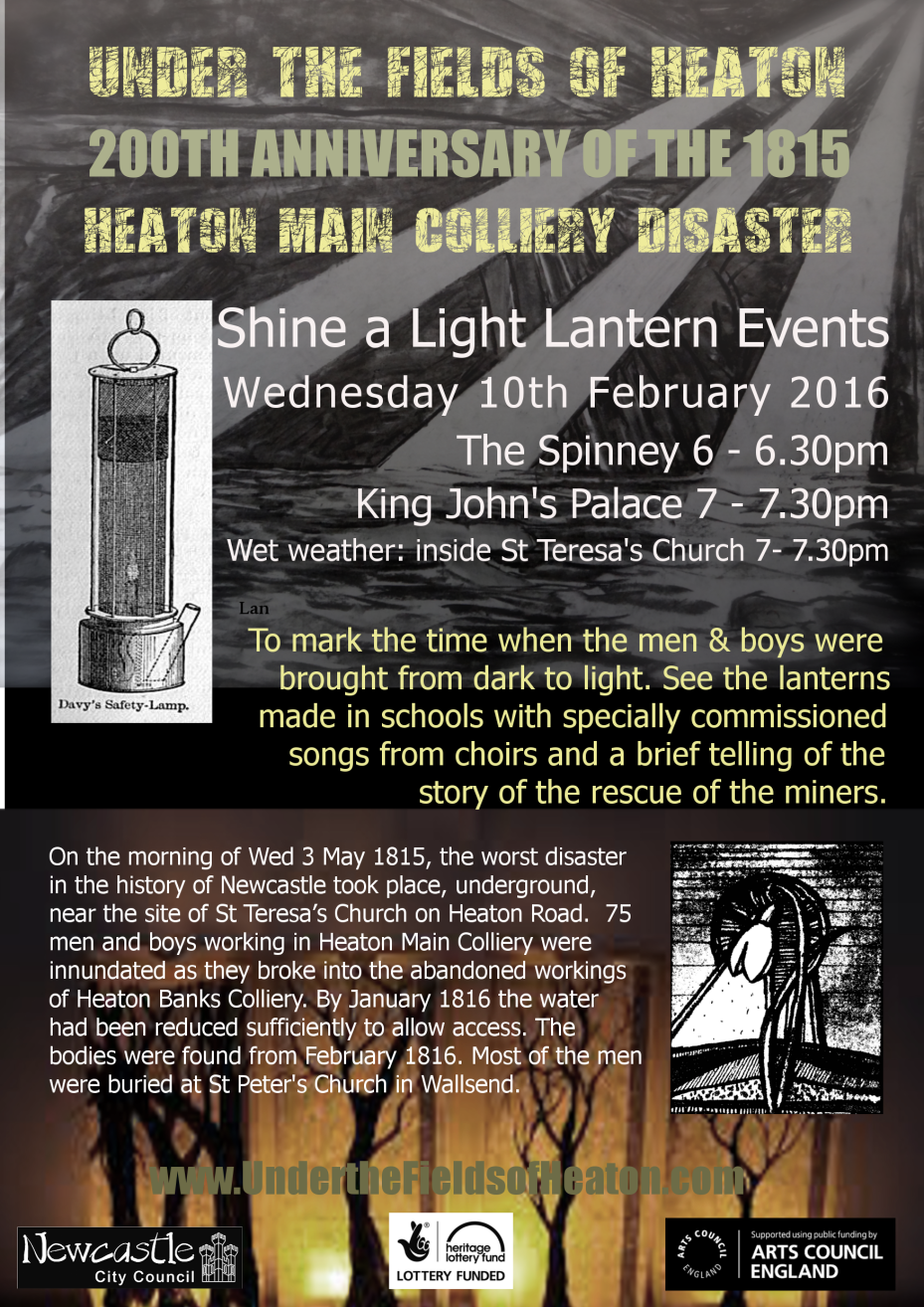 Lantern making workshops took place in nine primary schools in January 2016. We  remembered the rescue of the men and boys  with a lantern event at 6pm in The Spinney and at 7pm in King John’s Palace, Heaton Park. 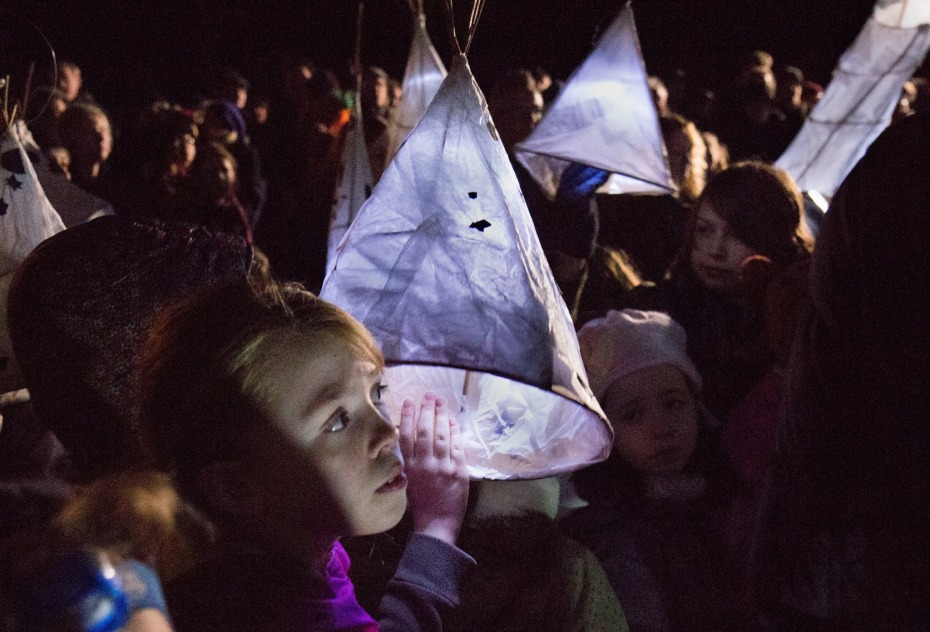 Snow drops bloom in February after their cold winter underground, and it’s the anniversary of the time when the bodies of the men from Heaton Main Colliery were rescued. 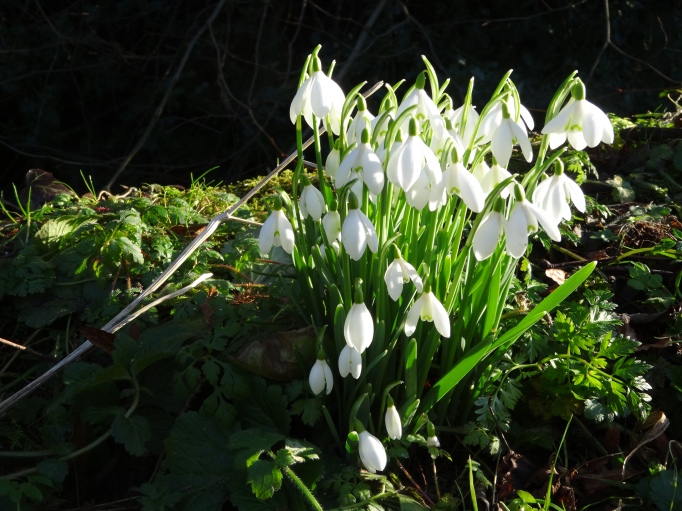 Jo Bulter, gardener, visited each primary school and planted snow drops with a class in suitable places in the grounds, ready to bloom in February, the time the miners’ bodies were put to rest in 1815.

We  planted further snowdrop bulbs (in the green) in special places in Heaton / the Ouseburn Valley throughout 2015 and 2016. Residents told us where they were planted and we put the site on our map.

We reached our hope for 75 sites in our area but come next spring we hope to plant some more!

We’ve given 4000 snowdrops to local schools, churches and residents (to plant in their private gardens).  Most of the snowdrops were distributed at the Spinney 2nd May event and at Heaton Festival on the 27th June 2015. 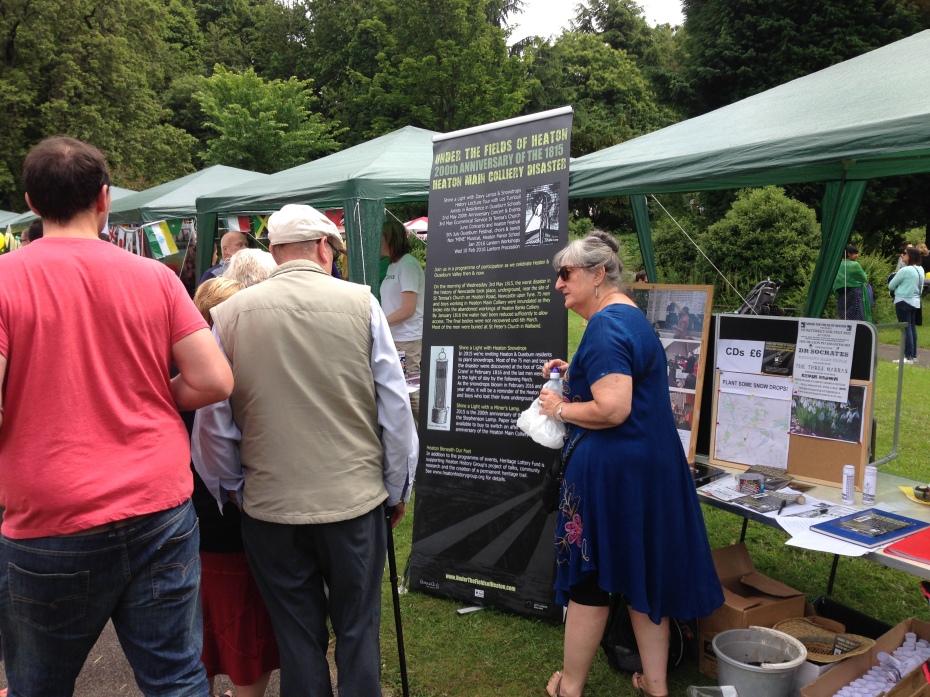 The white stars mark where the snow drops are planted! And now there are more than 75 new sites ready to bloom next spring.

The 75 men and boys of the Heaton Main Mining Disaster remained trapped under ground from 3rd May 1815 until March 1816.

The snow drops will help us remember the end of their entrapment and burial in St. Peter’s Churchyard, Wallsend.

If you’d like to tell us where you’ve planted more snowdrops, send us an e mail, below. 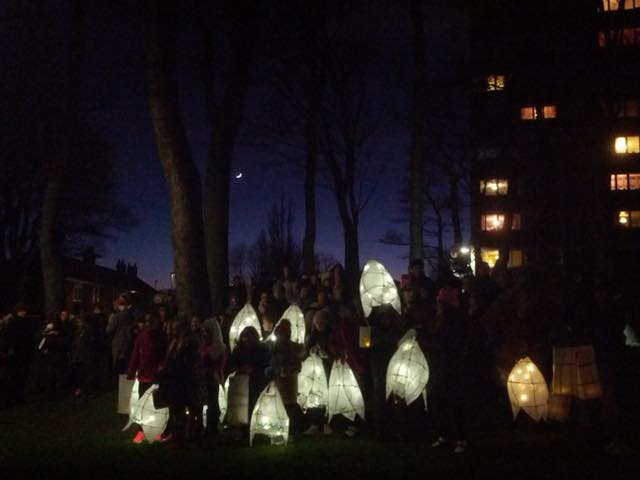 The Under the Fields of Heaton Group was formed in July 2014 in response to a Facebook Page calling for interest in the up and coming 200th anniversary of the Heaton Main Mining Disaster. They are Heaton residents: artists, musicians, writers, community workers, historians and teachers who are creating a programme of events for all who wish to join in a celebration of Heaton / Ouseburn as a community.
Loading Comments...
Comment
×
<span>%d</span> bloggers like this: